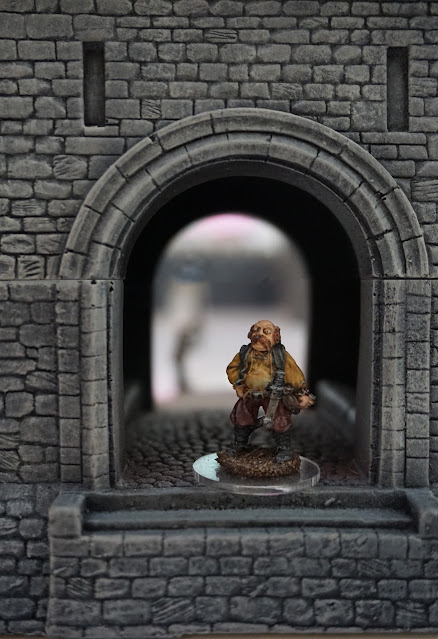 My desire for a miniature castle with which to stage battles and play out stories of derring-do goes back to childhood, like so many things wargaming related. I remember playing with some Marx Co. viking and knight toy soldiers my best pal Jerry Bell had when we were young kids in Ohio. But finding more toy soldiers from that historical period seemed nearly impossible in the 1970s, while WWII and Vietnam-era army men were ubiquitous and could be bought by the bagful literally at the local grocery store. It made sense that we switched instead to accumulating large armies of those plastic green army men, and they entertained us for years.
Jump ahead about four decades, and while attending my first Fall In convention I played a game in which I had to help defend a castle from besiegers. It was a great time, and I left the game knowing one thing: I had to acquire my own castle and replicate the fun at home with my friends.
The castle at Historicon was by the Miniature Building Authority, and it literally cost thousands of dollars, an amount I wouldn't be able to devote to my own castle. It was undeniably beautiful, but because it was made of resin, it was also quite heavy, making it not very portable as well as vulnerable to breakage.

I needed an alternative, and so I did a lot of research back in 2017 and landed on a modular castle set originally made by Hudson & Allen and now manufactured by Vatican Enterprises Wargame Scenics. I could pick up their six-piece modular "deluxe" castle kit for $295, which is exactly what I did. It's extruded foam, thus much lighter, and came unpainted (with a grey primer coat). I set it up on the kitchen table and was excited about getting it ready for a game. I was fairly intimidated by that prospect, though, because I really hadn't taken on a project even remotely this ambitious up to that point (Dec. 2017). In fact, I was still sending out all of my miniatures for commission painting to Mar Rosquites.

In the end, after chatting with Mar about how to approach the job, I decided to prime the entire set black, and then bought a couple of tester pots of a dark and a lighter grey house paint from Home Depot. No need to waste expensive hobby paints on a piece like this. After priming I used the dark grey for a very heavy dry brush, and then went over it all again with a much lighter dry brush using the light grey.
Then, as probably happens to a lot of wargamers, shortly after starting to paint the castle, I got pulled into another project (specifically an adaptation of "Beyond the Black River," which required me to create a whole jungle full of scenery pieces). I think I got two or three wall sections of the castle completed before I set it aside in early 2018.

And again, as has happened to many of us wargamers, the pandemic has seen me dusting off all sorts of unfinished projects. I decided to throw myself into finally finishing the castle, which had now come close to doubling in size with the addition of more modular sections ordered over the past couple of years.

Everything is finally painted and ready for a game, whenever that may happen again. I still need to get the portcullis and drawbridge pieces assembled for the main gate, but otherwise this is done...that is until I decide to order a few more modular pieces for the castle, like another tower or two with conical roofs, and some hoarding kits for the walls and towers, and...well, you get the picture.
Click on any photo to enlarge. The Scrum Club's official combat photographer, Ellen, helped out by snapping many of these. 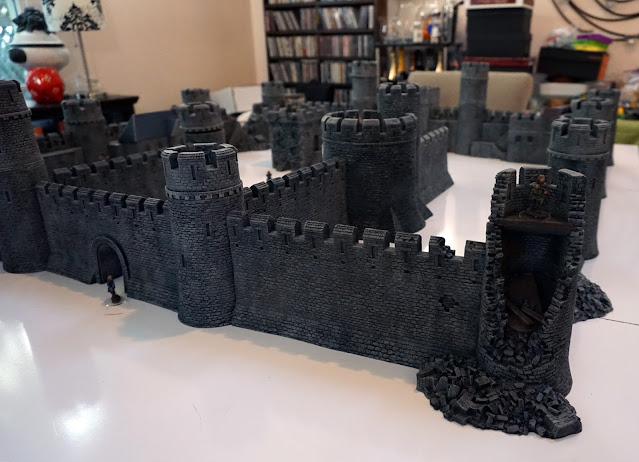 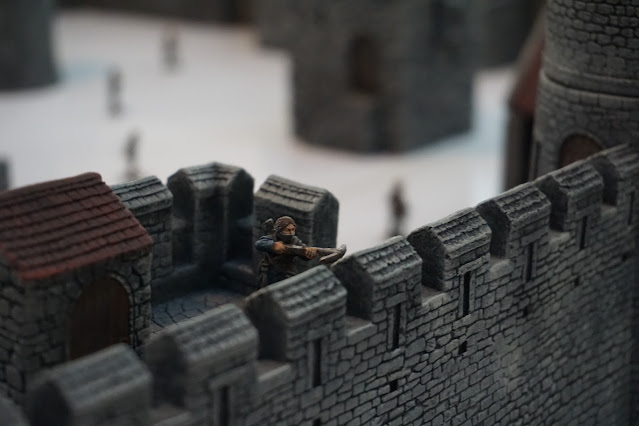 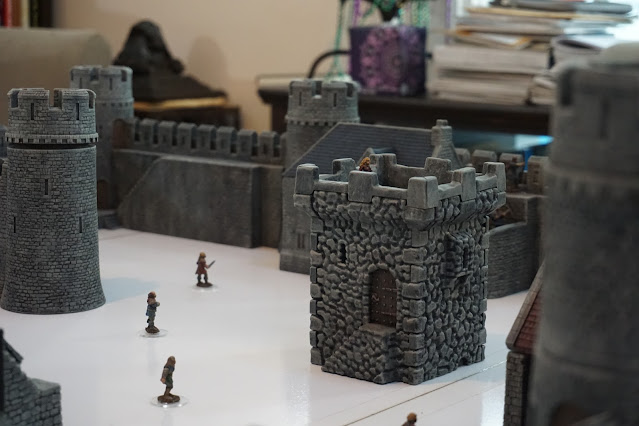 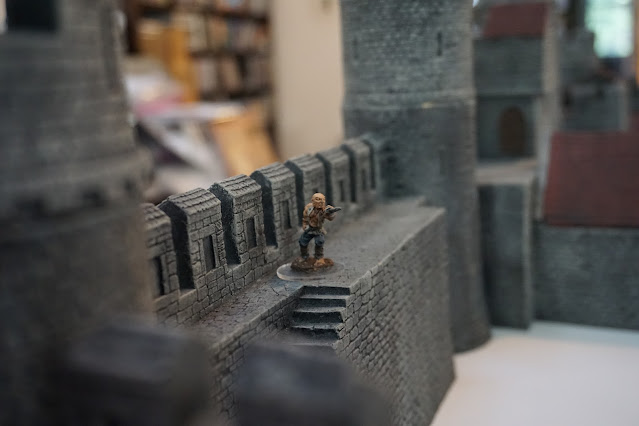 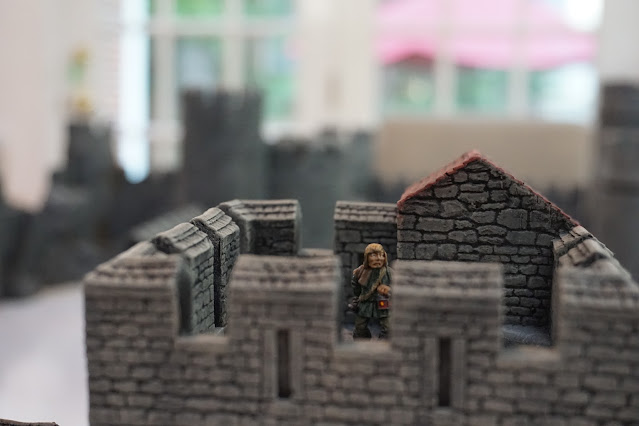 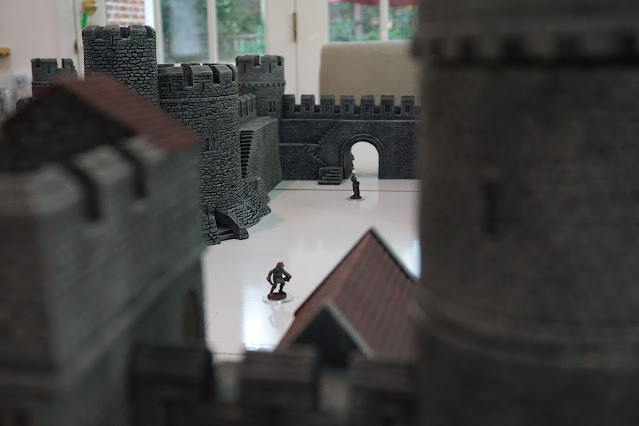 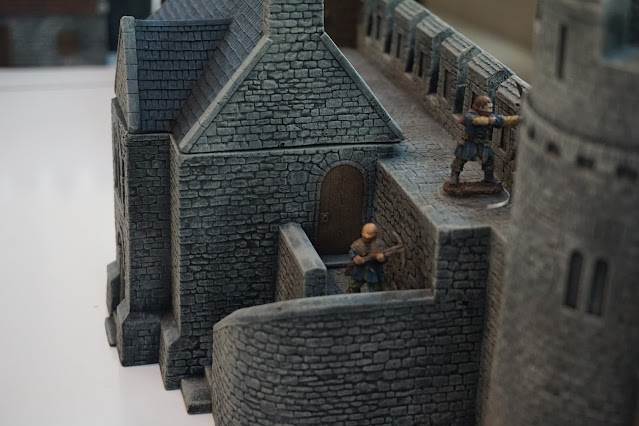 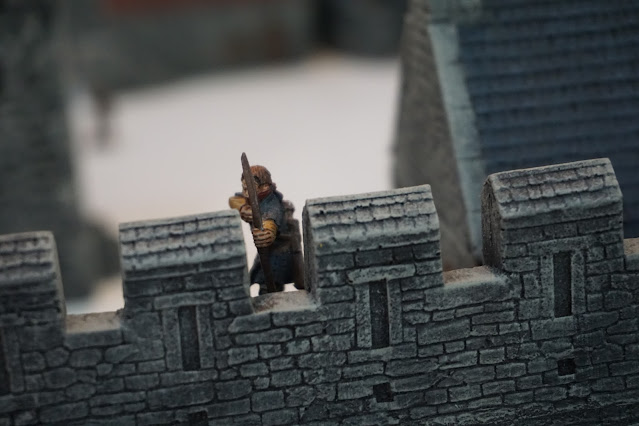 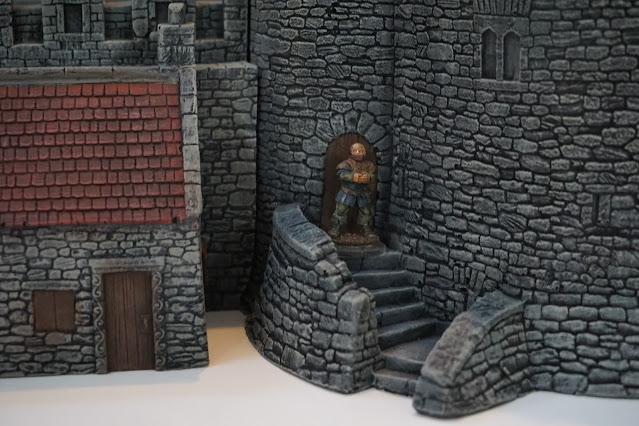 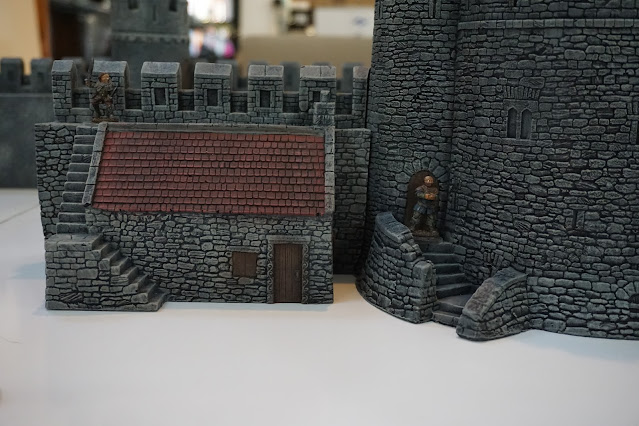 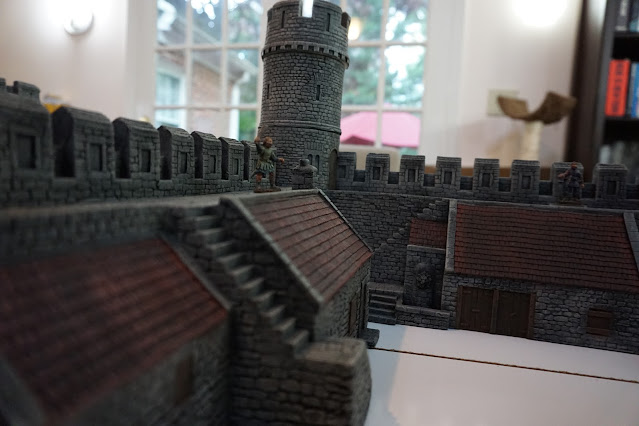 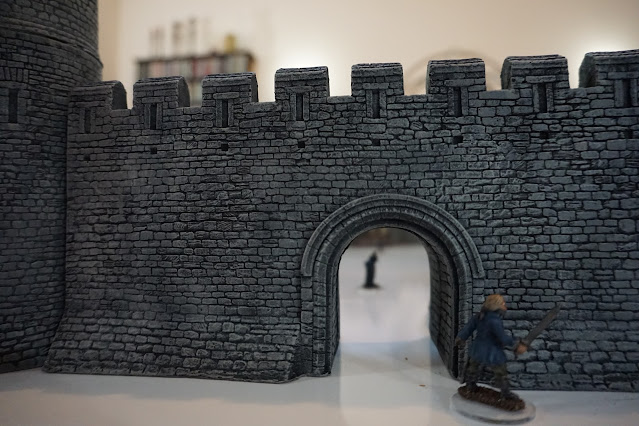 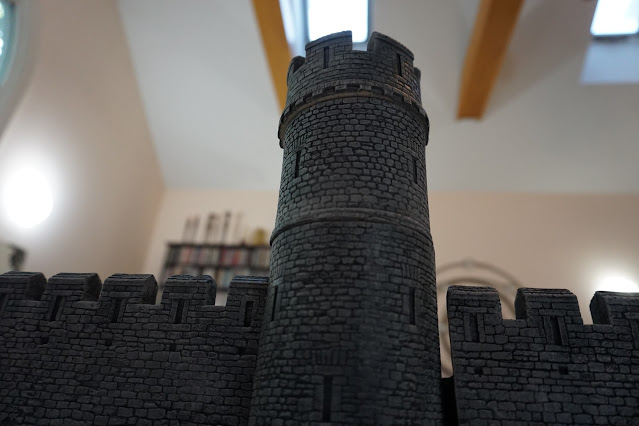 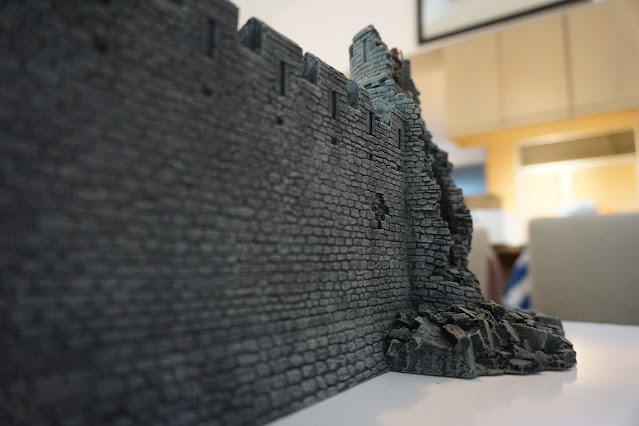 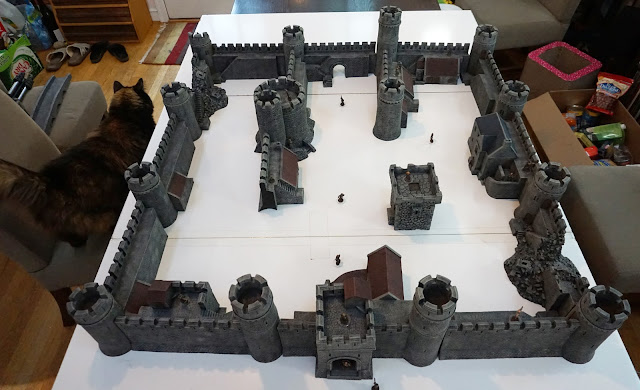 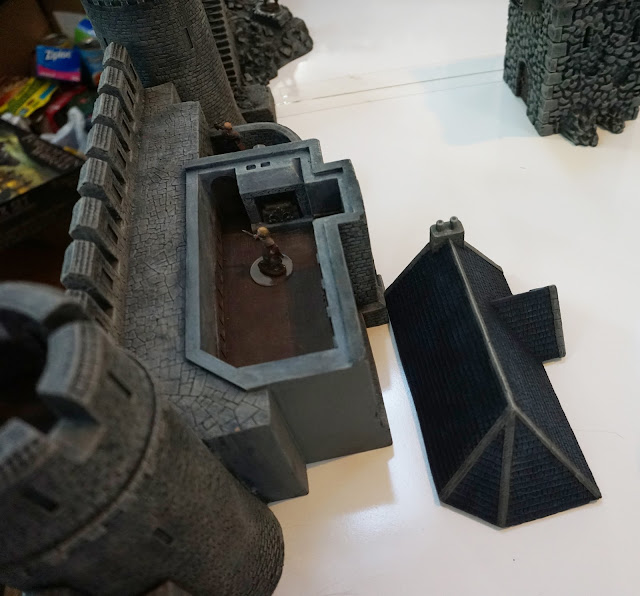 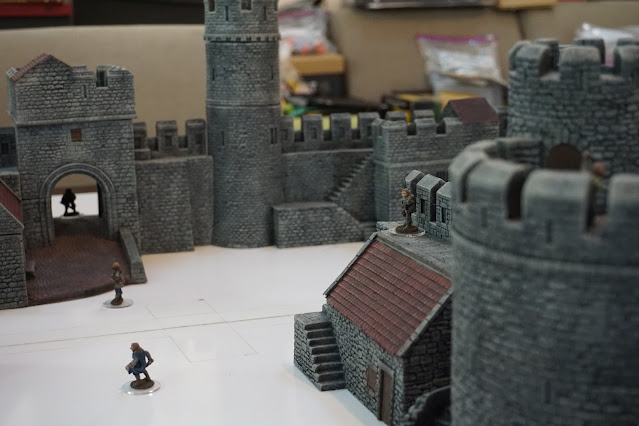 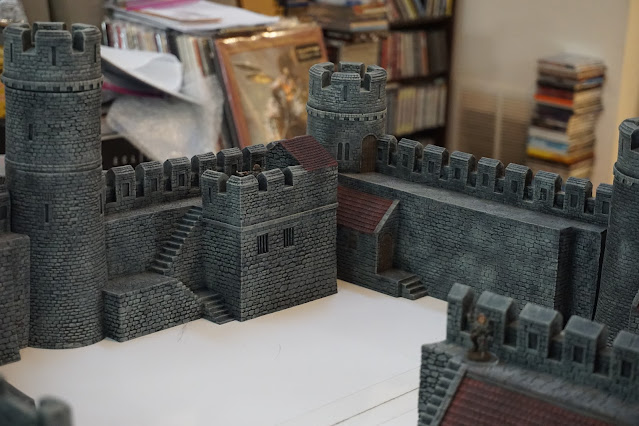 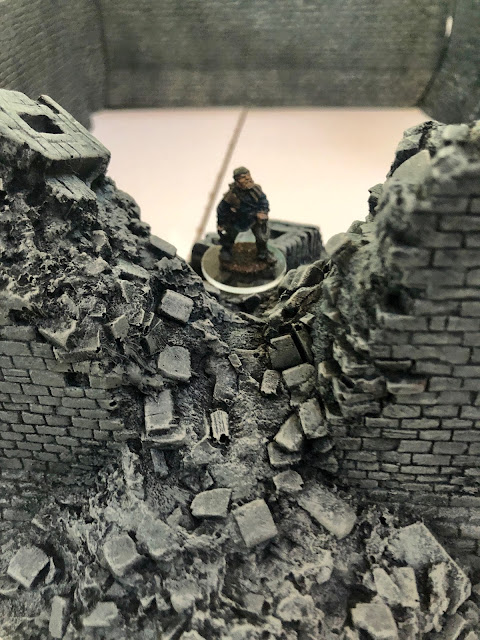 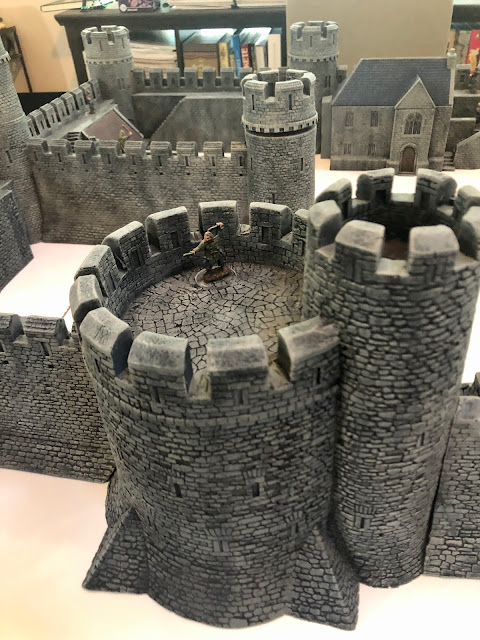 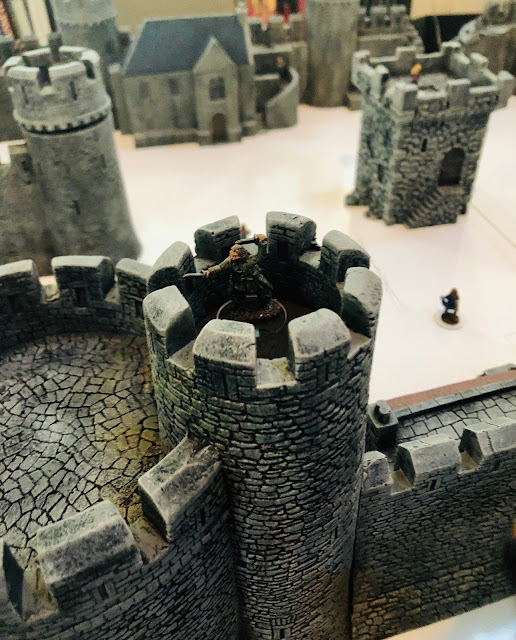 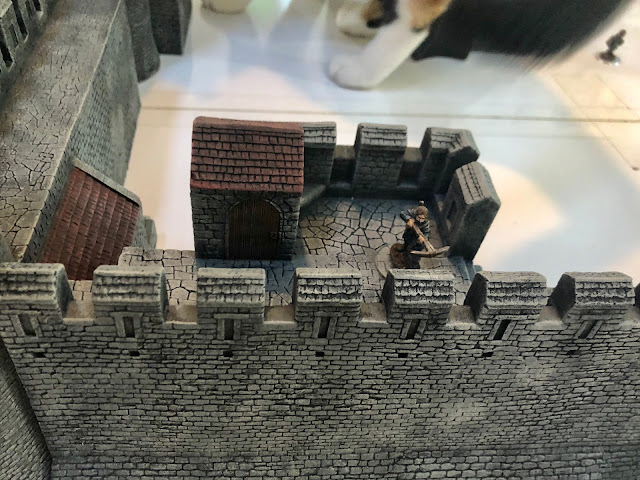 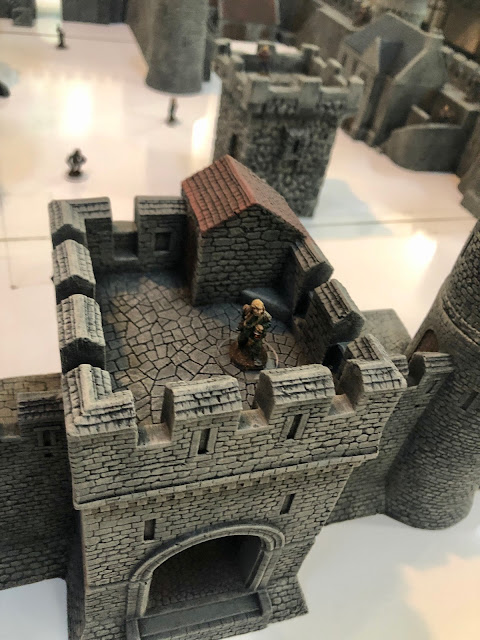 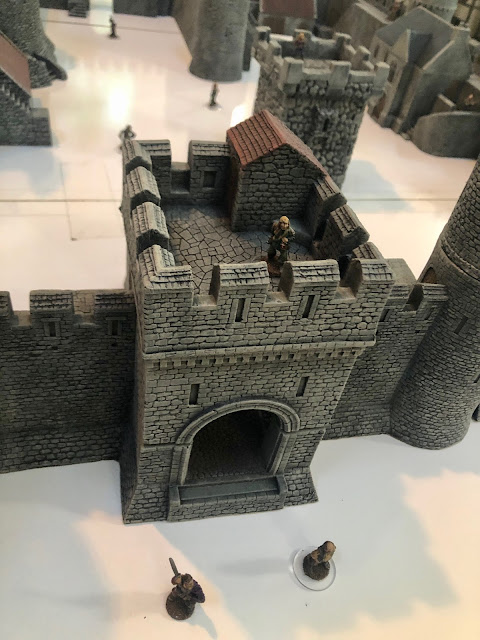 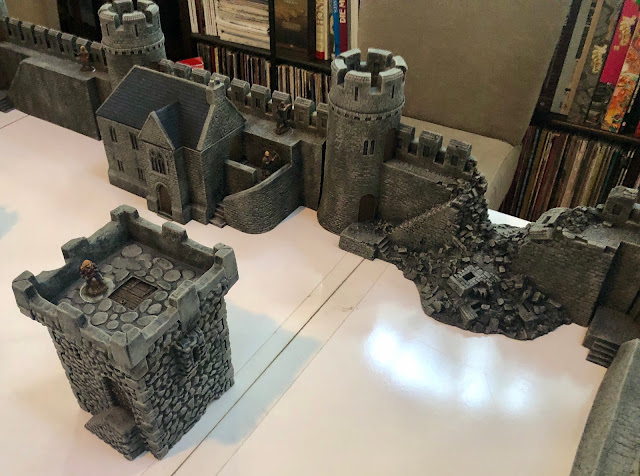 June 19, 2020
After Games Workshop attained the license to print a co-branded edition of TSR's 1977 Dungeons & Dragons basic rules book, they set about putting their own stamp on it, designing a new cover and replacing a number of the illustrations they deemed too crudely drawn for their U.K. market.  The cover art was by John Blanche at the very start of his career as a fantasy illustrator. Blanche went on to be a mainstay at Games Workshop, producing countless illustrations for them. His fannish enthusiasm for the material--as an artist as well as a lifelong gamer--has deservedly made him a favorite over the decades. I first encountered Blanche's work in the David Day compendium, A Tolkien Bestiary (1978), to which he contributed five illustrations that sit comfortably alongside the book's chief illustrator, Ian Miller. I have a special fondness for this book, having coveted it as a child during my incipient Middle Earth fixation. My parent's procured an out-of-print copy of t
3 comments
Read more

April 17, 2018
I've always enjoyed a good competitive match as much as the next guy, whether it was sports in high school or video games (HALO, etc.) in my thirties. But regardless of the game, I've always been partial to team play, and the best cooperative games put all of the focus on succeeding as a team. That's one of the reasons I was enthusiastic about getting Andrea Sfiligoi's latest release,  Sellswords & Spellslingers (Ganesha Games), on the table for this month's Second Saturday Scrum Club gathering. Last year I had organized a Halloween game ( recap ) to beta-test Sfiligoi's Run From the Dead , which is built atop the same cooperative mechanics as Sellswords . I was surprised when I discovered these rules were re-skinned for the fantasy genre and released last December ahead of Run From the Dead . Hopefully, the zombie apocalypse version of the rules is not too far behind because I definitely think  Run From the Dead  is the best tabletop miniatures rule s
7 comments
Read more

June 23, 2020
If you don't count playing Risk as a kid of nine with a bunch of adults on a camping trip, then Revolt on Antares was my first proper wargame. And it was infatuation at first sight. I had already been playing D&D for two or three years when I first clamped eyes on this game. I immediately recognized Jeff Dee's style on the cover art from his illustrations in the D&D books, and the idea of such a little box containing an entire game from D&D's publisher, TSR--"The Game Wizards," don't you know--was too enticing to pass up.  It was spring of 1981, and my family was on vacation in the Boston area to visit some close family friends (the Dashes) who had left Dayton, Ohio a couple of years prior. They had one son a couple of years older than me (Adam) and another almost exactly my age (Benji). In retrospect they could both be kind of obnoxious at times, but when they weren't, we found ways to have fun together. Our parents were quite tight as friend
4 comments
Read more