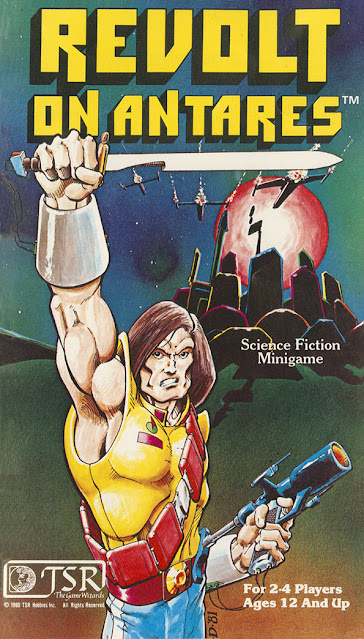 If you don't count playing Risk as a kid of nine with a bunch of adults on a camping trip, then Revolt on Antares was my first proper wargame. And it was infatuation at first sight. I had already been playing D&D for two or three years when I first clamped eyes on this game. I immediately recognized Jeff Dee's style on the cover art from his illustrations in the D&D books, and the idea of such a little box containing an entire game from D&D's publisher, TSR--"The Game Wizards," don't you know--was too enticing to pass up.
It was spring of 1981, and my family was on vacation in the Boston area to visit some close family friends (the Dashes) who had left Dayton, Ohio a couple of years prior. They had one son a couple of years older than me (Adam) and another almost exactly my age (Benji). In retrospect they could both be kind of obnoxious at times, but when they weren't, we found ways to have fun together. Our parents were quite tight as friends, and every other Sunday we would alternate between going to the Dashes for the day or having them to our place. Coincidentally, on one of these occasions it was Adam who brought over the Holmes Basic D&D set that introduced me to the game in 1979.
The Dashes had relocated to Framingham, Massachusetts, and one night we went to the mall in their neighborhood. Outside of a game store stood a cardboard standee with cubbies filled with the new line of TSR mini-games. I'm not sure how long I looked all of them over before picking Revolt on Antares, but it retrospect it was the luck of the draw because Antares has gone on to be considered the best of the TSR mini-game line. (I've subsequently in adulthood acquired them all.)
My "pal" Benji made fun of me for spending $4.95 of my vacation money on that "tiny little game." His mocking abated after we played it and both had a blast.
Back in Dayton I kept playing it with childhood friends, including my best school chum, Casey Dean. I know this because my copy still has our scores and "recruitment point" tallies. I only found one occasion in adulthood to crack the game open, while on vacation at the Outer Banks with another guy who had fond childhood memories of it. 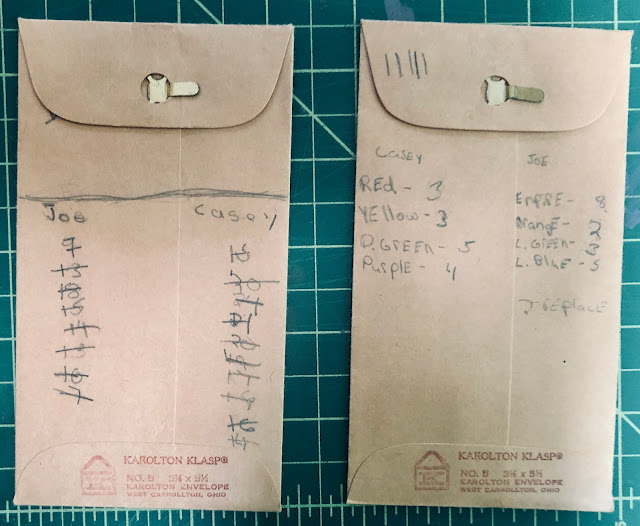 Back in 2016 I had a strong pull to revive some of those things that brought me such joy as an adolescent and teenager. I dusted off the Milton Bradley game Shogun and took it to a game day gathering at my local library, and while doing so I stumbled upon Revolt on Antares again. The diminutive size, which had been such a virtue in my youth, was now clearly going to be a source of frustration for these middle-age eyes and fatter fingers. The paper map was too flimsy to lay flat any longer, and the little chits were near-impossible to read, even with reading glasses, and so small and thin as to make moving and stacking them on hexes a fun-sucking chore. I knew before I asked any of my other middle-age friends to play it with me that I would have to fix these physical limitations.
This set me on the path in 2016 of recreating the whole game at a size about 50% larger. Scanning 84 already loose chits was going to be a nightmare to work with on the scanner and then in Photoshop, so I ended up procuring a new, unplayed copy on eBay for about $15 with the chit sheet intact and unpunched. I set about scanning the chit sheet and map, and then spending a few hours cleaning it all up (e.g., removing fold lines from the map, refining the art on the chits to increase their contrast/readability, etc.).
And then I got distracted and let the project sit unfinished for four more years.
Last week I remembered I had never gotten this project across the finish line, and so I ordered some Scrabble tiles from Amazon and got to work on the remaining digital restoration work necessary to print and construct this middle-age boys version of Revolt on Antares.
One of the things that's so lovable about the game is all of the great characters, implied plot lines/backstory, and "world building" that lurks in the rule book's scenarios and short descriptions of the factions and galactic heroes controlled by each player. The prime TSR-era art beautifully reinforces this, with characters and spacecraft designed by the likes of  Jeff Dee, Erol Otus, and Bill Willingham. I hated leaving all of this flavorful text stranded in the rule book, and to help game play and immersion I created character cards for each faction leader and each galactic hero in the game, with an even larger portrait than what appears on the chits. I also created a reference sheet for the ancient alien artifacts that can be recovered and used throughout the game to help your house's family win the battle for Imhirrhos, the ninth planet of Antares. And because I still had fuel in the crafting tank, I went ahead and cobbled together a couple of spare copies of the rule book that will hopefully keep my original from finally giving up the ghost and falling to pieces.
My wife Ellen saw me working on this much of last weekend, and though she isn't a gamer, she's volunteered to play it with me this coming Friday night. Love in the time of COVID-19 is a beautiful thing.
~~~~~~~~~~~~~~~~~~~~~~~~~~~~~~~~~~~~~~~~

Here are some examples I found online. I’ve always regretted that Nuckols didn’t produce work for any actual gaming material released by TSR (or any game company) because to this day I think he captured the gritty feel and texture of how I imagined these fantasy worlds in my mind’s eye. He was certainly a more accomplished artist than many of those who ended up in the stable as staff at TSR at the time. Artistically, his compositions are always compelling and typically eschew the over-heroic pose…
5 comments
Read more

June 19, 2020
After Games Workshop attained the license to print a co-branded edition of TSR's 1977 Dungeons & Dragons basic rules book, they set about putting their own stamp on it, designing a new cover and replacing a number of the illustrations they deemed too crudely drawn for their U.K. market.
The cover art was by John Blanche at the very start of his career as a fantasy illustrator. Blanche went on to be a mainstay at Games Workshop, producing countless illustrations for them. His fannish enthusiasm for the material--as an artist as well as a lifelong gamer--has deservedly made him a favorite over the decades.
I first encountered Blanche's work in the David Day compendium, A Tolkien Bestiary (1978), to which he contributed five illustrations that sit comfortably alongside the book's chief illustrator, Ian Miller. I have a special fondness for this book, having coveted it as a child during my incipient Middle Earth fixation. My parent's procured an out-of-print copy of the…
3 comments
Read more