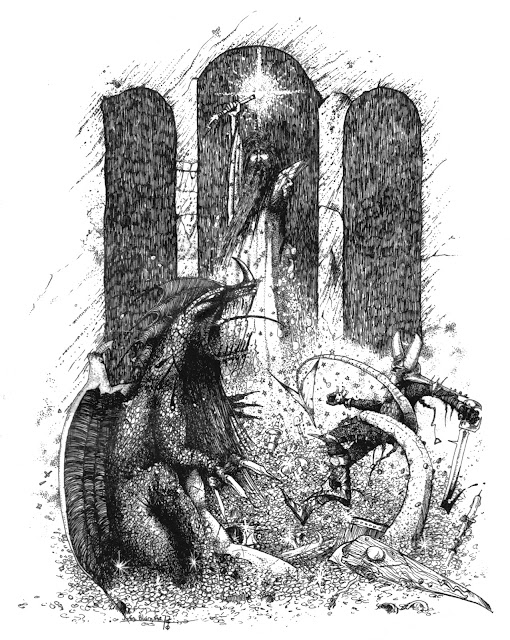 After Games Workshop attained the license to print a co-branded edition of TSR's 1977 Dungeons & Dragons basic rules book, they set about putting their own stamp on it, designing a new cover and replacing a number of the illustrations they deemed too crudely drawn for their U.K. market.
The cover art was by John Blanche at the very start of his career as a fantasy illustrator. Blanche went on to be a mainstay at Games Workshop, producing countless illustrations for them. His fannish enthusiasm for the material--as an artist as well as a lifelong gamer--has deservedly made him a favorite over the decades.
I first encountered Blanche's work in the David Day compendium, A Tolkien Bestiary (1978), to which he contributed five illustrations that sit comfortably alongside the book's chief illustrator, Ian Miller. I have a special fondness for this book, having coveted it as a child during my incipient Middle Earth fixation. My parent's procured an out-of-print copy of the book for me for Christmas in 1979 by driving out of town to Cincinnati, Ohio where they actually had to bid for it in an auction. They sensed just how badly I wanted it, and this backstory was incredibly exotic to me at age nine. Just yesterday I ran my forefinger across the spine in my library remembering what a lucky and loved kid I was.
As for the interior illustrations, a good number of them were replaced by Chris Baker's work, signed Fangorn (another Tolkien allusion). While he also contributed to Games Workshop products at various points in his career, he made a better living as a storyboard and conceptual artist for filmmakers such as Stanley Kubrick and Tim Burton.
Interestingly, all of the art for which Fangorn drew substitutes was by either David C. Sutherland III or Tom Wham. David Trampier (aka Tramp) contributed three pieces to the "Holmes Basic" book that were wisely deemed strong enough not to be replaced by Games Workshop. Trampier's work throughout his time at TSR, despite its devotees like me, still seems to be underappreciated by fans of D&D-related art. The fact that his Wormy comic strip from the back of The Dragon magazine has never been collected in a reprint volume is one of the great oversights in TSR/Wizards of the Coast publishing history.
As you'll see below, most of Fangorn's illustrations are indeed an improvement over Sutherland's, but these substitutions don't come without some interesting shifts in tone. And not all are indisputable improvements (e.g., the lizard rider drawing accompanying Gygax's foreword). It's interesting to note how many of the Sutherland illustrations contain multiple protagonists, more akin to the adventuring parties common in Dungeons & Dragons game play, while Fangorn's illustrations never have more than a duo of heroes (see, for example, the illustrations on page 31 and 44). Sutherland's illustrations feel slightly more indicative of the spirit of actual game play even if Fangorn's are typically the stronger drawings. The loss of the Tom Wham illustration is unfortunate but understandable: Wham's goofy tone worked better in the context of The Dragon and other, larger D&D books in which it was a welcome grace note of humor rather than an odd anomaly, which is how it feels as the only illustration of its sort in this edition of D&D Basic.

The Games Workshop edition of the Holmes Basic book replaces TSR's in-house price list that originally appeared on pp. 45-46 with a shorter version that lists its own gaming titles, fitting on just a single page (p. 46). In doing so, the GW edition also eliminates the below acknowledgment to Eric Holmes that appeared in the original TSR edition. The condensed price list and excising of the "About the Editor" note made room for an additional illustration unique to the GW edition.
There has been some speculation that Chris Baker was originally tasked with drawing the cover illustration for the GW edition, a reasonable assumption given the fact that he was the only UK artist to appear in the interior. This piece below, which originally appeared in the Fiend Folio, has been pointed to as the piece that may have been originally commissioned as cover art for GW's Basic book.
Again, as others have noted, all of the elements are there that appear in the John Blanche piece that was actually used, even though one could also argue that the tropes presented--a dragon on a pile of treasure, a wizard, and a warrior--had all been standard fantasy fare for ages. Regardless, this image by Fangorn is arguably a stronger piece than either the Sutherland or Blanche covers. At least it eventually saw the light of day in the Fiend Folio some years later.
-----------
If these art excavations interest you, you may also enjoy the first installment in this series, Lost Art of D&D No. 1: Alex Nuckols.
And a special shout out to fellow Scrum Club member Zach Howard of Zenopus Archives, whose blog filled in some gaps in my knowledge.
~~~~~~~~~~~~~~~~~~~~~~~~~~~~~~~~~~~~~~~~~

October 12, 2020
It's always a pleasure to find new wargaming friends, especially when they fall in line with your own gaming ethos and level of dedication to crafting fun games. Eric Hoffman had been scheduled to be a game master at Scrum Con in both 2019 and 2020, but family illnesses torpedoed his intentions both times. It's no fun as a convention organizer to have to scramble to find a replacement GM at the last minute, but life often gets in the way regardless of best intentions, and I completely understood his situation.   But having never met Eric, it was hard to know if it was a big loss to our con and its players who had signed up for his games. Now that I've had the chance to play with Eric a couple of times, I can definitively confirm that it was indeed a big loss, and now I'm really looking forward to him being able to run a game for folks at a future Scrum Con. Eric finally did get to attend a Scrum Con event of a sort when we hosted our virtual Summer Invitational back i
5 comments
Read more

August 11, 2021
In a year and half filled with dispiriting news and developments, sometimes the world whispers in your ear that not all is destined for despair. Some of you may recall a  post about my miniatures gaming guru Mar Rosquites from April 2020. It was a tribute to a friend out in San Francisco that I thought I had in all likelihood lost forever. As I recounted in that post, communications with Mar had ended abruptly, with the months of silence eventually broken by a cousin who contacted me to say that Mar had had a "stroke" and had lost much of his vision.  I came to learn later the reality was even worse. He had suffered from an undiagnosed heart condition that led to an aortic dissection, better described as a simultaneous stroke and heart attack in terms of how deadly and ravaging to the body it is. Most people die from the rapid internal bleeding from this literal tear that spontaneously occurs in the heart, as was the case with John Ritter back in 2003 at age 54.  It's
11 comments
Read more