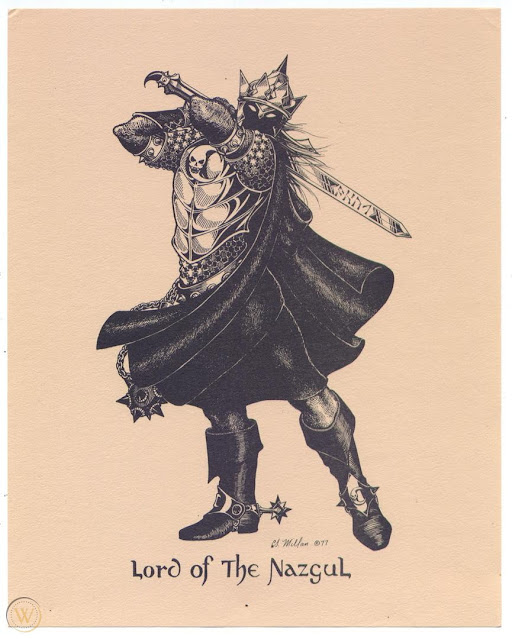 I've always found this to be an especially evocative piece.

I've only ever known it from the article on the Anti-Paladin NPC from The Dragon #39 (1980), but I've discovered that it was actually originally drawn three years earlier for a plate depicting the Lord of the Nazgul in a 1977 Lord of the Rings portfolio. The artist, Cynthia Sims Millan, was not credited in that issue's editorial box, and her signature was obviously deliberately excised from the artwork itself (see above plate and below page from The Dragon). At the very least this was extremely poor form on TSR's part, but I can't help but wonder if they even legally owned the rights to reprint the piece. 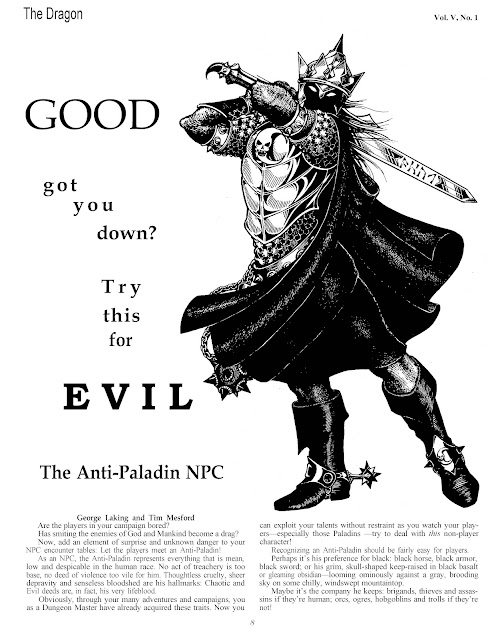 Besides this portfolio and a listing in the artist database on Board Game Geek, I could find precious little on Millan. The only games she seems associated with are a handful published by Heritage USA around 1980, and on all but one of those she seems paired with artist/graphic designer David Hebler, which makes me wonder if they may have been connected in more than a professional capacity. I happened to have my original copy of Knights and Magick at hand and found them listed in the credits as "Graphics Design by David Helber with Cynthia Sims Millan."

Here are a few other pieces from that portfolio... 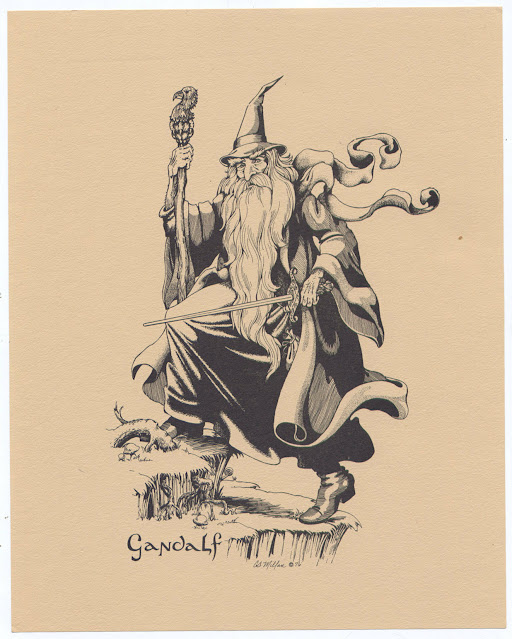 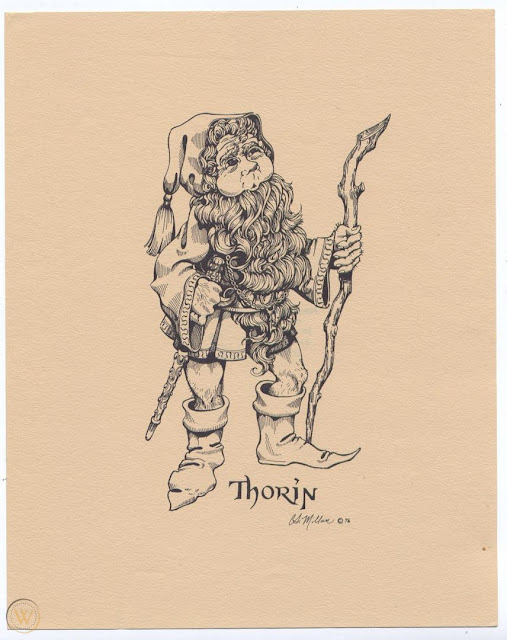 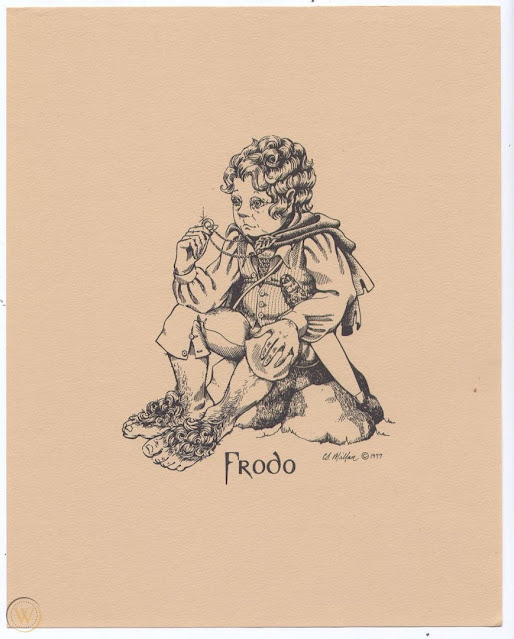 I would venture that the map to the solitaire micro-game Barbarian Prince might be the next piece of Millan game art that has had the widest audience. It's a wonderful game by Arnold Hendrick, and the map (integral to the hex-crawl adventure) is quite good, too. 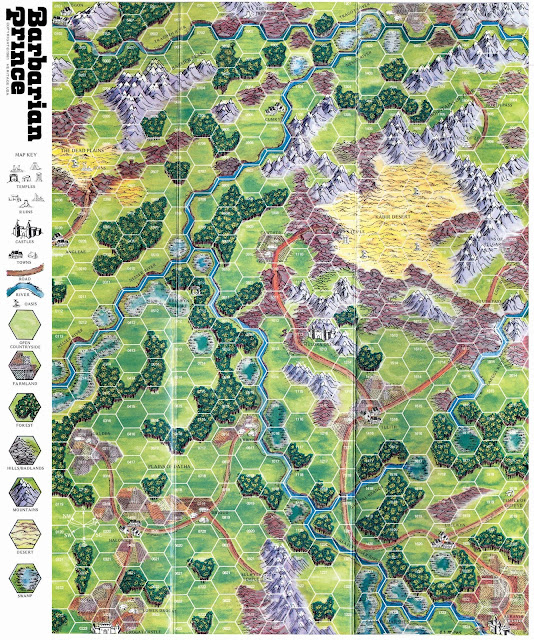 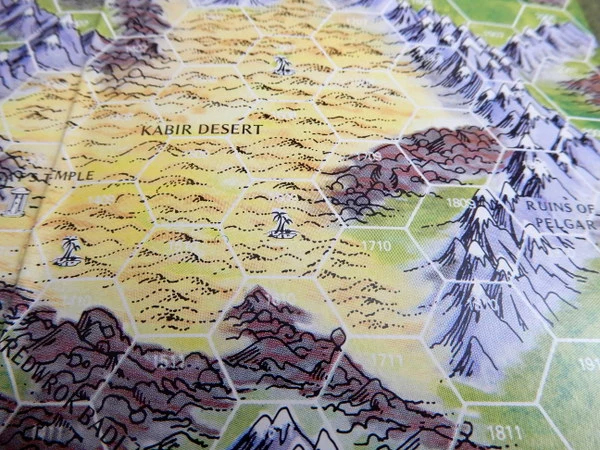 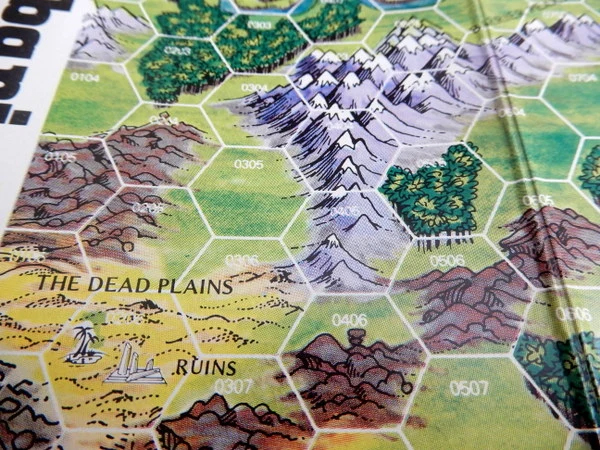 And though uncredited in the Board Game Geek artist database, following the Heritage USA breadcrumb trail led me to these four box covers for which Millan supplied the cover illustrations in 1980. These four plastic miniatures kits (below) were scaled-down versions of the larger game kits Heritage was designing that instead came supplied with metal miniatures. 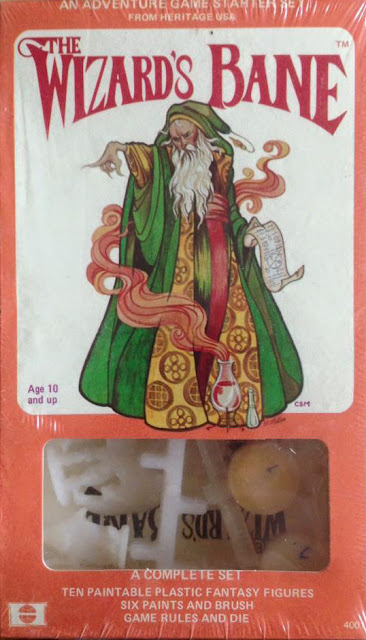 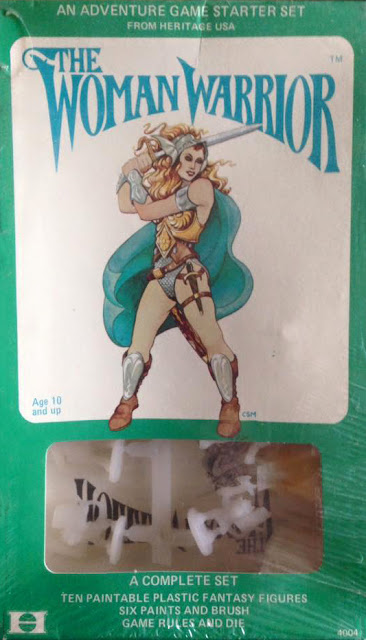 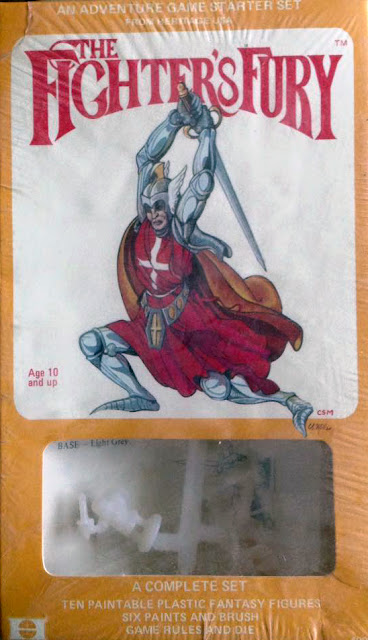 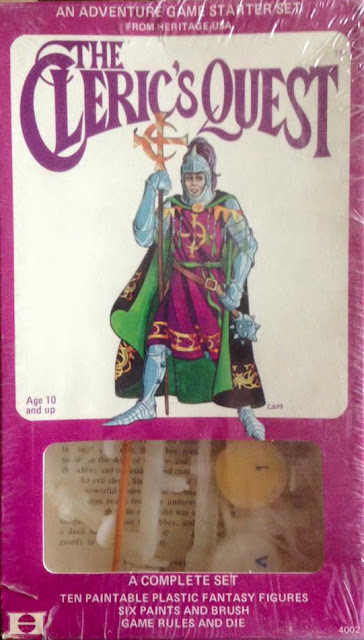 I had already planned to do a post in the coming weeks on Heritage's Dungeon Dwellers boxed miniatures games and their Arthurian-themed Adventure Gaming Kits, so I'll be sure to be on the lookout for any more of her work (her name is associated with all of those particular titles in the Board Game Geek database). If I discover more information on her or examples of her work, I'll update this post.

If you're curious about the first and second installments in the "Lost Art of D&D" series, you can check them out here!

Playing with Yourself: 'Rangers of Shadow Deep' vs. 'Sellswords & Spellslingers'

December 21, 2021
As the year crawls to an end, I'm looking through this blog and noticing a couple of posts I started and never finished. This is one of them. Back in July 2019, I placed the photos on the page, jotted down a few bullet-point placeholder notes, and then never actually went back and wrote anything to post.   The post was meant to be my informal review of Rangers of Shadow Deep after my first game of it with Josh O'Conner, who set it up for us to try in his basement. I think I never finished this post because I was not very impressed with the game but I knew Josh was, and we hadn't been gaming together long enough for me to be sure my candor about the game wouldn't hurt his feelings and sour a budding gaming friendship. I consider Josh more than a gaming friend these days, and so I'll go ahead and post this with some very short notes fleshing out the bullet points I had left as a reminder for myself back in 2019 (at least the one's I can still decipher the
2 comments
Read more

Battle Beyond the Star Schlock

January 01, 2022
A subset of the Scrum Club and some of our friends met for a game on Dec. 30 to close out 2021. In addition to guests Peter M. and Mark A. (visiting from Minnesota), we were finally able to also have Dave "Zeb" Cook over to Scrum Hall (i.e., my dining room) for a game of some sort.  Scrum Con —the convention we organize here in the DC metro area—has been lucky to include Zeb as our guest of honor since its inception in Feb. 2019, and the idea of him coming over to the house to game with us started getting bandied about not terribly long thereafter. Like so many pre-COVID plans, however, the pandemic sadly put the idea on indefinite hold. But when I bumped into Zeb at Historicon last month and we got to chatting, it seemed like we should revisit the idea of getting a game in together and settled on the week between Christmas and New Years.  Fortunately, the Scrum Club has a handful of pretty fun games at the ready that we've prepped and run at conventions over the yea
4 comments
Read more

The Slow Road to Recovery: Historicon Returns in 2021

November 18, 2021
I braved the pandemic and the five-hour roundtrip for a one-day excursion to Historicon this year. Two of my fellow Scrum Club mates (Steve and Walt) went for the entire affair, but John, Francesco, and I drove up to Valley Forge Saturday morning, arriving shortly before noon and leaving the convention by around 6:00 for the Washington, D.C. metro area. Four of us (sans Walt) grabbed a mediocre burger at Habit Burger Grill near the Valley Forge Casino before we drove homeward into the night. Francesco kindly drove the entire way there and back. The morning trip was quite lovely, with the tree leaves nearing peak fall intensity. Earlier in the year I had booked a hotel room for three nights of the convention, when the vaccine was initially rolling out. Never would I have imagined at that time an anti-vaxxer movement could be strong enough to leave us struggling to achieve reasonable vaccination rates all the way into November, but the past four years should make absolutely nothing a s
Post a Comment
Read more