May 12, 2019
We don't typically shoot video for our Second Saturday Scrum Club gatherings, but I got tired of seeing those Little Wars TV fellas getting all of the glory, so we're launching our own Scrum Club TV.

I've been impressed by the industrious guys at Little Wars TV, their really cool renovated club house, and the fact that they seduced away Miles Reidy to their ranks just before I had a chance to recruit him as a member of the Second Saturday Scrum Club. Although they seem much more interested in historicals than most of the members of the Scrum Club, I get a real sense that we're kindred spirits, at least in regards to having some really talented members who like to augment the club's gaming with related extra curricular activities.

Their Little Wars TV YouTube channel was an inspiration for us to launch something similar that we're calling Scrum Club TV. The plan is to shoot and cut a video after our monthly gatherings that will likely be a post mortem of the game we played that night. We typically have these discussions anyway as a natural part of the conviviality that characterizes our gatherings, and a couple of us Scrummers decided recently we ought to just turn the iPhone's camera on and see what we get. The discussion in the first video was decent enough that we're going to keep giving these a try, promising to "deep six" any that don't yield something we think might be of interest.

We're also going to shoot interviews and provide convention reports, starting with the upcoming Historicon (and we might be able to muster up reports on Origins and GenCon this summer, too, since some of the Scrummers are attending those). Look for me and some of my club mates to perhaps corner some of you for short interviews at those cons.

In the meantime, we hope you enjoy our first episode, shot in March after finishing up a three-scenario session using the new solo/co-op rules, Rangers of Shadow Deep. The discussion compares Rangers with another favorite system of the SSSC, Sellswords & Spellslingers, which Steve B. and I have both run at HMGS conventions in the past year, crafting scenarios based on the Robert E. Howard story, "Beyond the Black River." It, too, is a new solo/co-op ruleset by a long-standing fan-favorite game designer in the field, so a discussion comparing the two felt natural, even inevitable. Let us know what you think in the comments to this post or on YouTube.

We were also excited to find a field report filed by Josh O'Connor devoted to last February's Scrum Con for his new YouTube channel, Tankard Talk. There's lots of neat footage of our fledgling little con, as well as a short interview with me and, far more importantly, the convention's guest of honor, David "Zeb" Cook. Josh joined our club right around the time of the convention, and we're looking forward to him contributing his talents to the next Scrum Con, behind the camera and as a GM at the game table.

Let us know your thoughts on Josh's video, too, either on his YouTube channel or in this post's comments.

Our next Scrum Club TV video will appear in a couple of weeks, and it is devoted to the post-game discussion from last night's gathering at which we playtested fellow Scrummer John Sears' work-in-progress rules for a game he's writing called Star Schlock. I'll try to get a blog post together for that game with lots of great photos of John's beautiful terrain and miniatures before the end of the week. 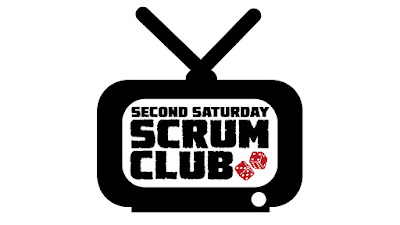 Here are some examples I found online. I’ve always regretted that Nuckols didn’t produce work for any actual gaming material released by TSR (or any game company) because to this day I think he captured the gritty feel and texture of how I imagined these fantasy worlds in my mind’s eye. He was certainly a more accomplished artist than many of those who ended up in the stable as staff at TSR at the time. Artistically, his compositions are always compelling and typically eschew the over-heroic pose…
4 comments
Read more

July 16, 2019
Historicon is turning into one of the highlights of my summer. I've developed some fond friendships over the past three years of attending and feel like I'm beginning to be more a part of a community and less a neophyte or spectator. It was at the first Historicon I attended in 2017 that I met future fellow Scrum Clubbers Walt O'Hara and Steve Braun, and the circle of gaming friends has expanded significantly from there to include great guys like Ivor Evans, Miles Reidy, Jeff Allen, Joe Bloch, Eric Schlegel, and a bunch of the HAWKs gaming group (Don, Duncan, Buck, Chris, Greg, Bill, et al.).

The two hour trip up to Lancaster Friday morning made for a lovely drive with the convertible's top down and Spotify blaring out a summer tunes mix. I had found a great Airbnb condo five blocks from the convention, but I decided to go straight to Historicon without checking in (which finally happened a bone-weary dozen hours later and well after midnight).

I spent most of that fi…
4 comments
Read more